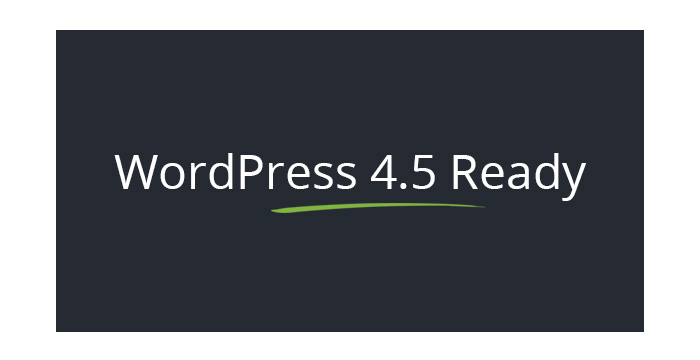 An updated WordPress 4.5 Coleman was released on April 12, 2016. This new version of the platform has been named after Coleman Hawkins – an American jazz tenor saxophonist. The new Coleman makes it much easier to edit and customize the WordPress content without any effort. So let us observe the main changes in detail:

1. Native Support for a Theme Logo

A code of the new WordPress’s native support for a theme logo is borrowed from the implementation of Jetpack plugin. If support for a custom logo is declared by the theme, you can see the upload form added under the Site Identity panel of the native Customizer.

Developers can now include support for a logo using a standard and understandable technique. Users are sure to know where to find the logo upload form if developers follow core’s implementation. As there are many WordPress themes with their own unique implementation, the standard way of including a logo is definitely a useful update.

2. Live Responsive Previews and Selective Refresh in a Customizer

Now you don’t have to test the website on different devices to see how it responds. The Customizer controls footer includes buttons enabling desktop, tablet and phone-sized device previews. Customize your website with mobile devices in mind and see the results! Previews are more instant now. There’s no need to reload the entire preview for every setting change. The customizer is now able to provide a great live preview experience which wasn’t available in the previous versions. A live example of selective refresh is already observed when you edit menus. Core themes and widgets now come with selective refresh feature which positively impacts the performance. Coleman version of WordPress now has an intuitive interface for editing inline links in the visual editor. If a user enters an URL or makes an attempt to search for it, the interface detects it automatically. As the user is typing, the existing content is populated by the search feature using jQuery UI Autocomplete. More formatting shortcuts for lists and headings are now available. The shortcuts can be used both for code tags and horizontal lines. Images now load up to 50 per cent faster and don’t lose their quality thanks to the increased compression.

Support for script header and footer dependencies is now improved.

Embed templates are now split into separate parts so a user can customize them by themes using the template hierarchy.

Please check out the video to watch the highlights of the latest WordPress 4.5 release.